This may contain affiliate links. You can read the affiliate disclosure here.

How to preserve a carved pumpkin with this fun Jack O’Lantern Rot Prevention Halloween Science Experiment!

Use common household items to make your Jack-O-Lantern last longer! 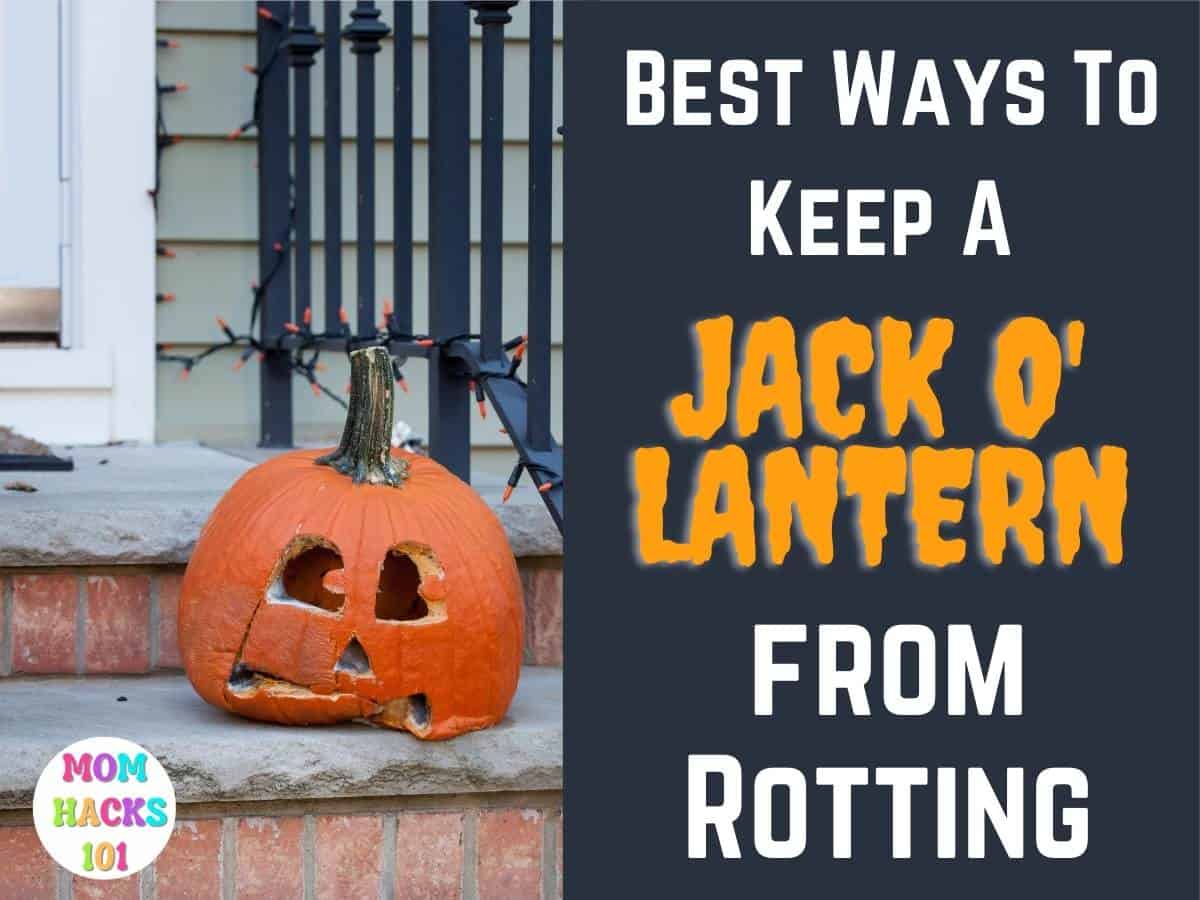 Halloween is next week!

It’s time to carve pumpkins to make them into spooky jack o’ lanterns to display on the front porch.

We did a little Halloween science experiment to find out how to preserve carved pumpkins to make them last longer.

How Long Do Carved Pumpkins Last?

As soon as a pumpkin is carved then mother nature starts the decaying process and they start rotting.

A carved pumpkin can last 4-7 days depending on conditions such as weather, the health of the pumpkin, and pests.

To prove this theory we carved a pumpkin into a jack o’ lantern and did nothing else to it.

Every day we checked the pumpkin for mold.

By day 3 the pumpkin had mold growing inside.

By day 5 the pumpkin was rotting on the outside.

The temperature outside was a little warmer for the typical fall season. 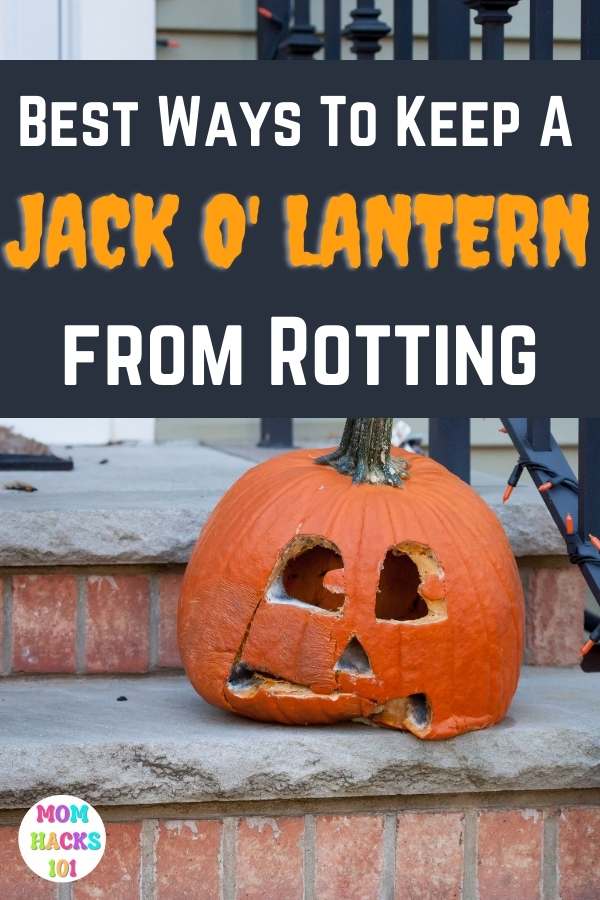 To find out the best way to prevent carved pumpkins from rotting, we did a little Halloween science experiment.

We tried 4 different ways to preserve a carved pumpkin to see which one works the best.

You may be surprised that you can use common household items to make your jack o’ lantern last longer.

No need to buy pumpkin preservation spray because some of these methods work really well at keeping your carved pumpkin from rotting.

Now let’s go over some ways to preserve your pumpkin in order from worst to best.

All these methods were compared to how long a carved pumpkin lasted by using nothing at all.

Check out these jack o’ lantern tips to keep your carved pumpkin from rotting.

How To Preserve A Carved Pumpkin With Mouthwash 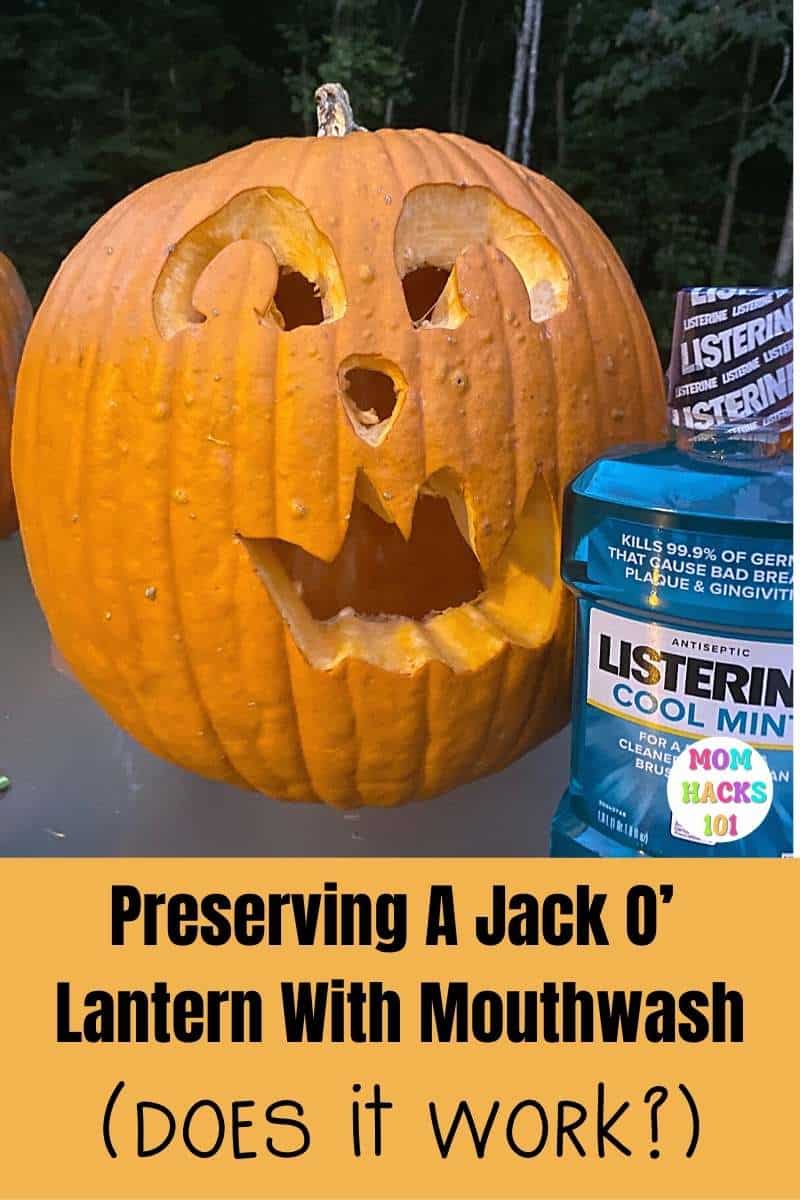 Some people say that you can use mouthwash to keep your jack o’ lantern from rotting.

You can either soak your carved pumpkin in a mix of 2 parts mouth wash with 1 part water.

Or you can mix mouthwash and water in a spray bottle and spray the inside and outside of your carved pumpkin.

We used mint flavored Listerine for this Halloween science experiment.

The mouthwash mixture does keep your pumpkin hydrated which is a very important step in pumpkin preservation.

However, this pumpkin molded the fastest.

In fact, the mouthwash seemed to attract bugs more than any other method.

You may find all over the internet and social media that people claim that you can preserve a jack o’ lantern with vinegar.

Just like the mouthwash, you can either soak the carved pumpkin in a mixture of 2 parts vinegar and 1 part water or use a spray bottle to spray the inside and outside of the pumpkin.

Vinegar has antifungal and antibacterial properties.

We had high hopes for the pumpkin preservation method.

However, we were disappointed when we found out this pumpkin rotted at the same amount of time as the pumpkin that used nothing. 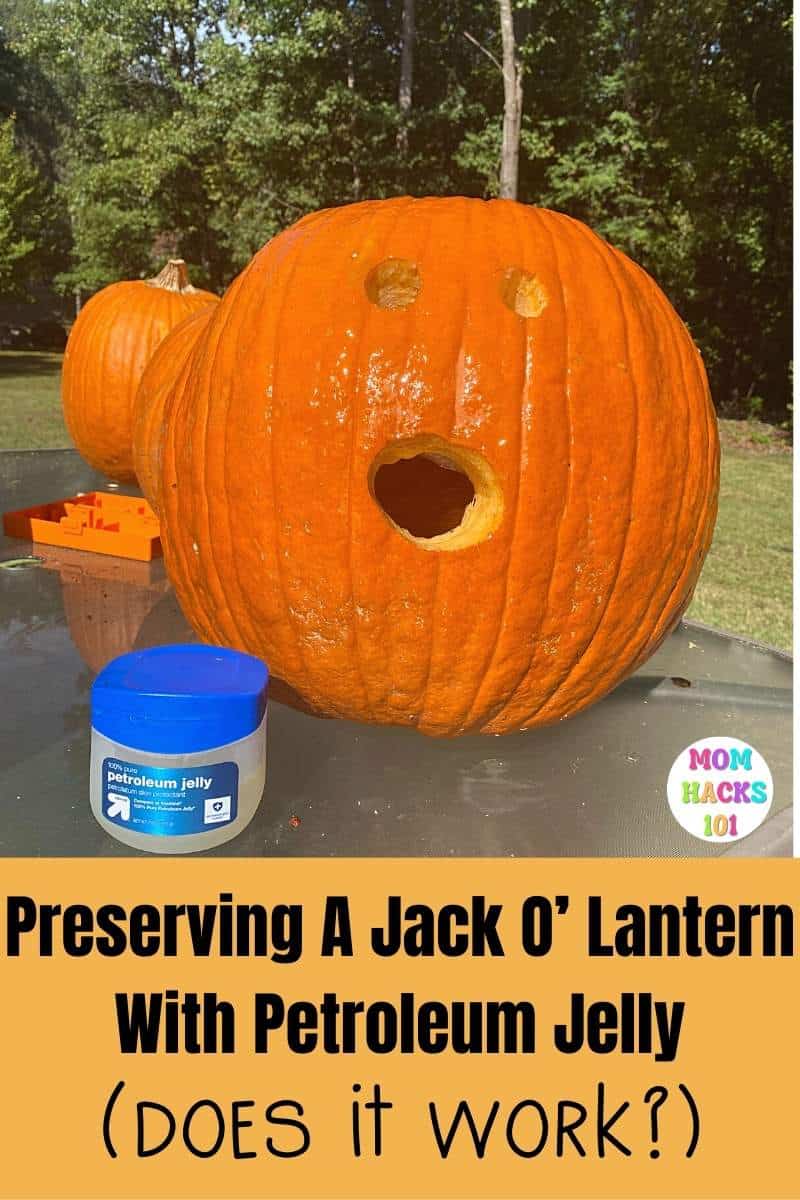 Many people say you can use petroleum jelly or Vaseline™ to preserve a jack o’ lantern.

The method calls for smearing petroleum jelly inside and outside the carved pumpkin.

This method keeps your pumpkin hydrated.

We were surprised by the results.

The only downside is that the Vaseline™ made bugs stick to the pumpkin. 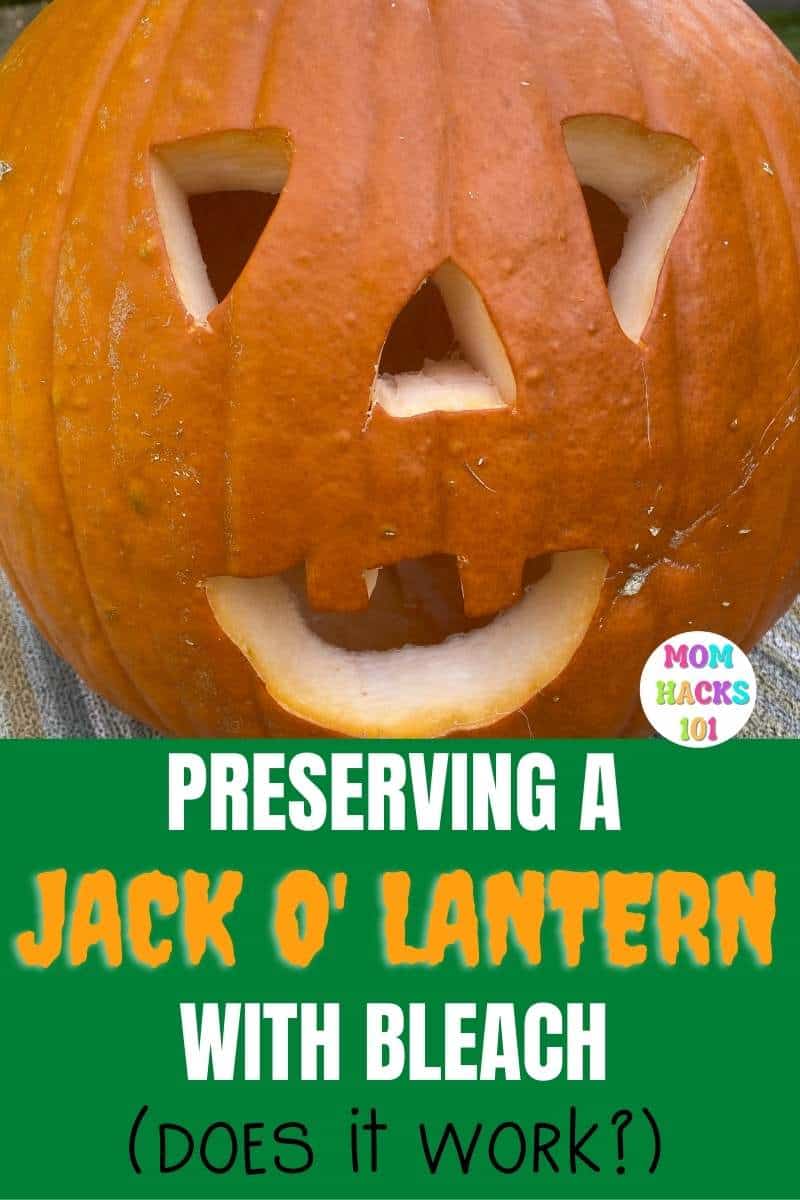 Many people use bleach to preserve carved pumpkins.

This method works by mixing 2 parts water with 1 part bleach in a large bucket and soaking the carved pumpkin in the bleach mixture for several hours.

After soaking, we set our pumpkin upside down while it dried.

It does turn the inside of the pumpkin whiter but it actually looks really good and makes the jack o’lantern stand out more.

This method of preserving a pumpkin kept the jack-o-lantern from having any mold for 9 days.

How To Preserve A Carved Pumpkin

So now you know what household items you can use to preserve a carved pumpkin and what items don’t really work.

However, petroleum jelly did come in at a strong second place.

I would suggest using one of these two methods to keep your jack o’ lantern from rotting and making it last longer.

We DID NOT use candles with any of these methods.

I suggest using battery-powered tea lights to light up your jack 0′ lantern in whatever way you decide to preserve your carved pumpkin.

For more Halloween Fun be sure to grab your FREE Halloween Scavenger Hunt Printable!

Click on the Smart Mom Resources to find the best resources for Moms to save time, money and sanity while finding joy in the everyday moments!

Be sure to check out the Mom Hacks Shop for awesome Mom Hack Must-Haves! 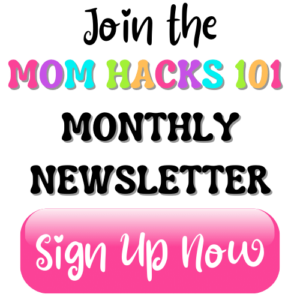 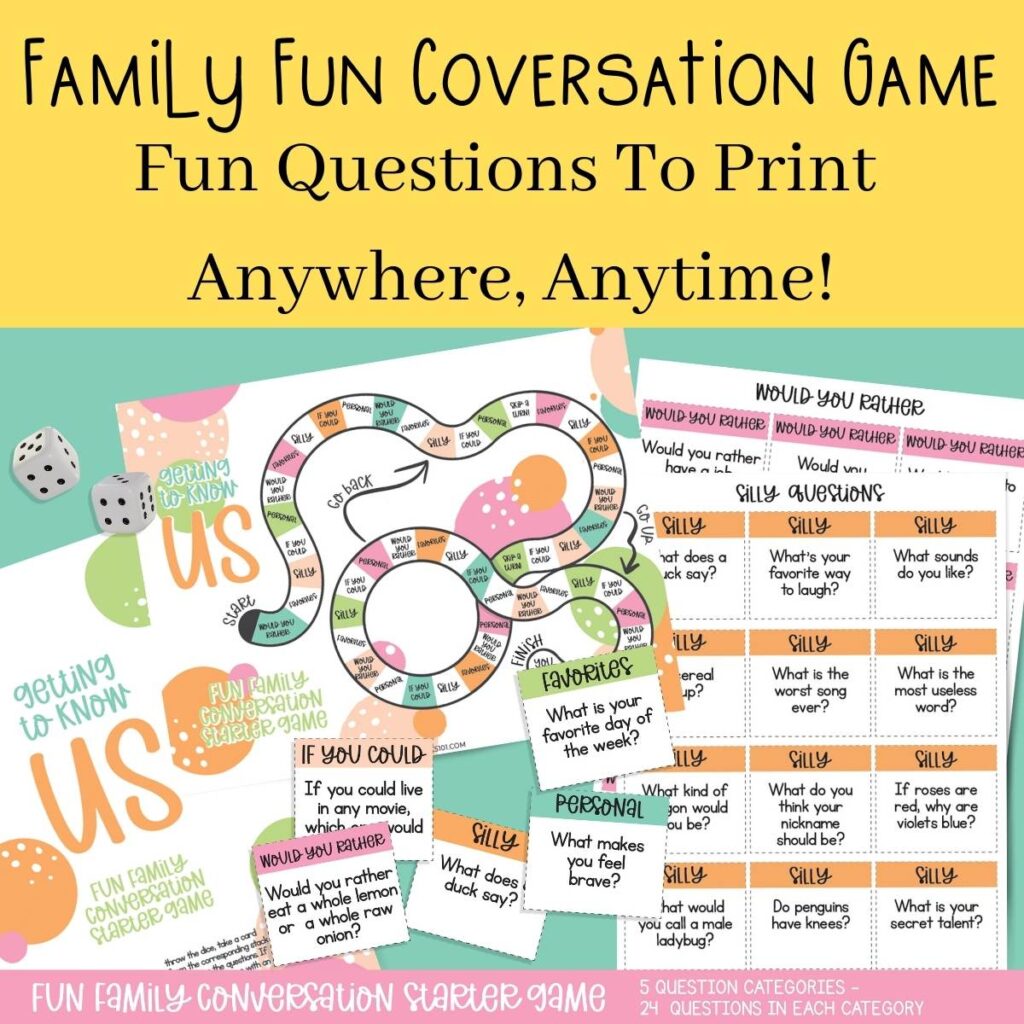